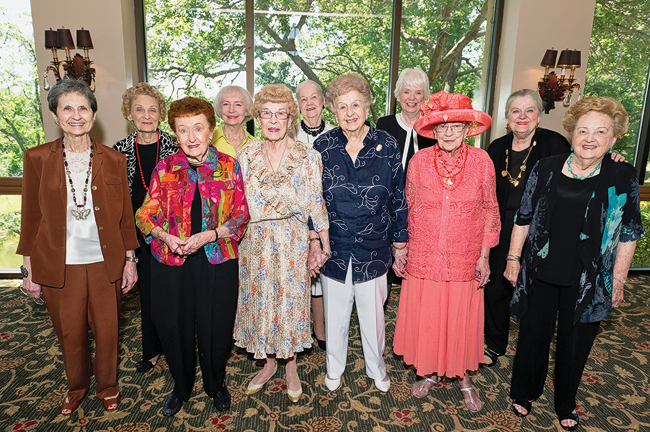 Eleven ladies met at the Prestonwood Country Club in June, members of a group that has reunited each year for decades. Depending on when they attended North Texas, they were known either as Phoreffs, members of the girls social club organized on campus in 1935, or Delta Chi Deltas, members of the local sorority the Phoreffs became in 1944. Some also are members of Alpha Delta Pi, the national sorority the group affiliated with in 1953-54. Members from the early days reunite to catch up and remember old times.

“Ours is not a growing group, but we are still here,” says Rose-Mary Brau Rumbley (’52, ’53 M.Ed., ’70 Ph.D.), who keeps a mailing list of about 85 members and helps organize the reunions. After lunch, she shared greetings from members too far away to travel back and gathered updates on others who had moved or passed away.

Two Phoreffs who remember the group from its very beginning are Dorothy Lee Dillon Vestal (’36) and Wilma Jo West Bush (’36). Vestal, who was a charter member, invited Bush to be in the first pledge class, and the two are still fast friends 75 years later. They remember the earliest gatherings simply as times of fun.

The name “Phoreffs” was a variation on “four F’s,” remembered as “faithful friendships formed forever.” The 1936 Yucca reports that the group was organized to provide “greater social opportunity for the young women of the college.” The first year’s activities included twice-a-month meetings, a Christmas party, a formal tea, a dinner-dance at Marquis Hall and a picnic honoring the group’s sister organization, the Kaghlirs.

Loretta Smith Hudspeth (’41), a music major from Mabank who sang in the A Cappella Choir, remembers the dances, life in the Phoreff House and especially the restaurant where the girls took their meals. It was there one morning she asked a waiter named Bud Hudspeth (’46) to serve her first because she had a long walk across campus, and he called to ask her out that same night. He passed away on their 58th wedding anniversary.

Betty Salem Korioth (’53) was the president of Delta Chi Delta when the local sororities and fraternities on campus began the work to affiliate with national Greek organizations.

“Dean Bentley would call and tell us new groups were waiting to talk with us about affiliating, and we would go up and interview them,” says Korioth, who returned the next year to become a member of Alpha Delta Pi.

At the luncheon, Rumbley spoke to the group about Myrtle Hardy, the first sponsor of the Phoreffs, who gave “expression” or “elocution” lessons. Hardy taught speech as head of the drama department at North Texas.

“She would say, ‘Rid yourselves of that uncultured Texas accent, but never sound affected,’” remembered speech major Rumbley, in her best dramatic voice.

Rumbley — whose husband, the late Jack Rumbley (’51, ’52 M.M.Ed.), was the drummer for ’Fessor Graham’s Aces of Collegeland and played in the symphony and marching band — shared her list of “amazing things about UNT.” Included were the Texas Fashion Collection, the Murchison Performing Arts Center and the library’s Portal to Texas History, as well as the move of the Texas State Historical Association to campus.

She says all of the Phoreffs and Delta Chi Delta members are proud of their North Texas connections. 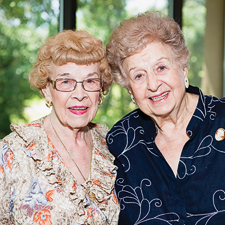 “Do you ever wonder why we’ve lived to be 95?” Wilma Jo West Bush (’36) asks Dorothy Lee Dillon Vestal (’36). The two have known each other since their North Texas days, when Vestal was a member of the original group of Phoreffs in 1935 and Bush was a member of the group’s first pledge class. They lived in the same boarding house on Oak Street, got married at the same time and went on trips together through the years — even when Vestal lived in Chicago and Bush lived in West Texas.

“Our lives have paralleled in many ways. Our husbands even had strokes at the same time and died within months of each other,” Bush says. “It’s been an unusual kind of friendship.”

Bush was a singer with the ’Fessor Graham stage shows — “For 25 cents you could enjoy symphony music, a jazz band and a movie,” she remembers with a smile. Her husband-to-be, Guy E. Bush (’39, ’40 M.S.), was a violinist in the stage band and symphony. He served in World War II and later worked in civil service as head of the education department at the Amarillo Air Force base.

After earning her bachelor’s degree in business from North Texas, Bush went on to earn her master’s in counseling from West Texas State University and a doctorate in special education and psychology from Texas Tech. She is a Professor Emeritus at now West Texas A&M University who has written two books with Charles Merrell Publishing: Aids to Psycholinguistic Teaching and Diagnosing Learning Disabilities.

Vestal, who is “2 months older to the day” than Bush, transferred to North Texas after attending Wayland Baptist in Plainview for two years. She earned her degree in elementary education and taught in Alvord and in Arlington (“with a population of maybe 6,000 at the time”) before working in civil service on military bases and later in the Social Security office. Her husband, Paul Vestal, was an analyst for Quaker Oats and often traveled to the company’s plants in England.

Both ladies ended up back in the Dallas area. Bush and her husband returned from Amarillo to live near their daughter and son-in-law, Jo Betsy and William Loyd Smith (’91 M.P.A., ’96 M.S.), and other relatives. Vestal later moved from Sherman to be closer to her brother, who died five years ago. Now she shares Bush’s extended family.

The two friends came back to Denton to visit the Alpha Delta Pi House before it opened in 2004 and say they did notice the campus has changed a bit since their days as students.

“I loved North Texas,” Bush says. “Life has been good.”