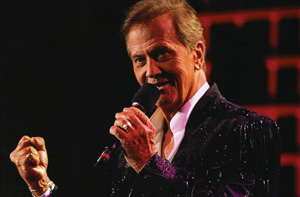 Music legend Pat Boone returns to campus to sing the national anthem for the first football game at UNT's Apogee Stadium Sept. 10 and will share stories and perform a few of his hits at 4 p.m. the next day in the Murchison Performing Arts Center. The author, entrepreneur, actor, humanitarian and recording star — who studied at North Texas in 1954 and 1955 — is recognized by Billboard Magazine as the No. 10 rock recording artist in history. He performed at 'Fessor Graham stage shows as a student before hitting the national spotlight on the Ted Mack Amateur Hour. Debuting on the charts in April 1955, Boone was a force of the early rock era and has inspired fans ever since.

Find out more about Pat Boone and his music with the the Pat Boone Radio iPhone app. >>