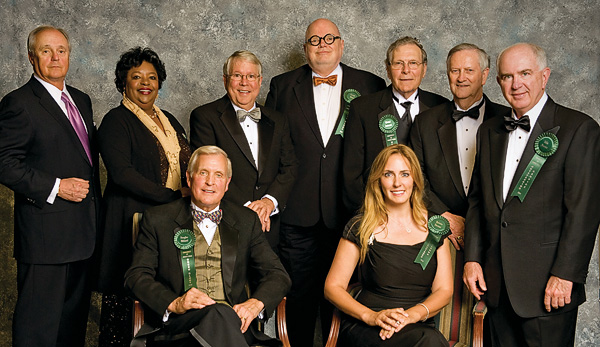 The annual Alumni Awards Dinner set the stage for highly esteemed honors bestowed by the Alumni Association and Division of Advancement upon UNT alumni and other university contributors April 16 in the Gateway Center.

First presented in 1965, the Distinguished Alumnus/Alumna Award is the university’s most prestigious for alumni and is presented for distinguished professional prominence and extraordinary contributions to society. This year’s honorees were Rhys J. Best (’69), Kristin Farmer (’95 M.Ed.) and John Robert “Bobby” Ray (’69).

“The Alumni Awards provide a unique opportunity for us to see what our graduates have done to improve our world,” said then-Interim President Phil Diebel, who presented the awards this spring. “Each of the honorees embodies an excellence in knowledge, creativity, enterprise and community engagement — all the things that UNT values and tries to impart in its graduates.”

Shortly before earning his degree from North Texas, Best began a 20-year banking career. In 1985, he capped it with a presidential post at First City Bank in Dallas, which was the fourth largest bank in Dallas at the time. He later joined Lone Star Technologies Inc., a public holding company that manufactures steel tubular products for the energy industry, becoming president, chair and CEO, a role he kept until Lone Star merged with U.S. Steel Corp.

Best serves on several public and private corporate boards and is chair of the board of Crosstex Energy LP. In 2006, he was recognized as an Ernst and Young Regional Entrepreneur of the Year. Throughout his career, he has been active in various community and civic affairs and has served as a member of the UNT College of Business Board of Advisors.

Leldon E. Echols, a fellow board member with Best at Trinity Industries Inc. and Crosstex Energy LP, says, “Rhys is an outstanding business professional who conducts himself and treats others in a completely honest, straight-forward, courteous manner, with high integrity.”

In 2002, she co-founded La Casa Center for Autism, a nonprofit organization that caters to patients who cannot afford services. In 1996, she began Autism Comprehensive Educational Services. Through personalized treatment and applied behavioral analysis, ACES has had an impact on more than 10,000 individuals and families dealing with autism, developmental disabilities and behavioral disorders.

“One of her greatest strengths is her inability to accept ‘no’ for an answer to a dream, goal or inspiration,” Anderson says. “Instead, she finds a different path.”

Born and raised in Denton, Ray earned his bachelor of business administration degree from North Texas, and after working at Texas Instruments, began a career in homebuilding. He became president and partner of one of Dallas-Fort Worth’s top homebuilding companies. After selling the company to K. Hovnanian, Ray remained with the new company serving as a group president.

Ray was appointed to the UNT Board of Regents in 1995 and served until 2007. During his final eight years, Ray was elected chair. In his tenure on the board, UNT experienced enrollment growth, a significant increase in campus building projects and the creation of the College of Engineering and Discovery Park.

In nominating Ray for the award, Jim Grandey (’67) — who has known Ray since the first grade in Denton — and his wife, Diane Moore Grandey (’68), say not only did his leadership on the UNT board help propel the university forward, but Ray “has continued to look out for UNT interests as a member of the Select Commission on Higher Education and Globalization and also the Task Force on Higher Education Incentive Funding.”

Ray serves on the Plano Presbyterian Hospital board and the advisory board for Northern Trust Bank of Texas.

President’s Citation
Presented to individuals who have given extraordinary service and support to UNT either by enhancing its reputation or by helping the university accomplish its mission.

Green Glory Award
Presented to acknowledge individuals — not necessarily alumni — whose assistance to UNT has enabled the university to provide a standard of excellence in its endeavors.

Ulys Knight Spirit Award
Presented to an individual or group that has made noteworthy efforts to sustain spirit among the UNT family. Ulys Knight (’28), a basketball player named most popular man on campus, was later known as “Mr. North Texas” for his participation in alumni activities.

The journey to grad school

Down the Corridor: UNT yearbooks online