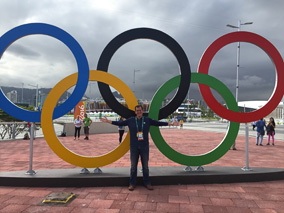 When Jamaican sprinter Usain Bolt broke his own world record in the 100 meter run at the 2008 Beijing Summer Olympics, Ted Emrich ('09) could only watch the action from thousands of miles away, via TV.

Eight years later, Emrich watched Bolt again race for gold at Rio de Janeiro's Olympics Stadium -- while relating the action to radio listeners around the world from a few yards away from the track. Emrich, formerly with KESN-FM, ESPN Radio in Dallas, was chosen by Westwood One Sports, a radio network, to do play-by-play for track and field events at this year's Summer Olympics. He also called two Team USA men's basketball games.

Emrich says he couldn't wait to see Bolt, whom he calls "the greatest sprinter of all time," attempt to keep his title of "world's fastest man." Bolt did end his events in Rio, and his Olympic career, by claiming an unprecedented "triple triple" -- a gold medal not only in the 100m, but also in the 200m and 4x100m relay. He is the only man to win all three of these sprint events at three straight Summer Olympics. Bolt retired from Olympic competition with the end of the Rio games.

"To be the one who was entrusted to call these events in Bolt's last Olympics was so exciting," Emrich says.

He chose UNT for its "top-notch program" in radio, television and film, now media arts. 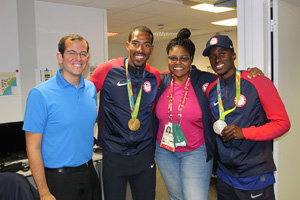 While enrolled in the Honors College, Emrich worked three years for North Texas Television and KNTU-FM, broadcasting Denton ISD football and UNT men's basketball games. He was the host of NTTV's live coverage of the 2008 presidential election returns and completed a news internship at WFAA-TV.

Rio was Emrich's third Olympics assignment for Westwood One. The radio network first hired him as a general assignment reporter for the 2012 games in London. He announced about a dozen sports -- everything from archery and beach volleyball to diving and weightlifting.

"There was a new story to tell every day, and I interviewed many medalists," Emrich says. "I was only 24 years old. It was a great experience and my first big break to go national."

At the 2014 Winter Olympics in Sochi, Russia, Emrich was a reporter for freestyle skiing and snowboarding, and also called four-man bobsled. He worked both the London and Sochi Olympics for Westwood while still working full time on KESN-FM, where he provided sports updates, hosted the station's Dallas Cowboys pregame show, and filled in as a studio host for the Dallas Mavericks Radio Network.

Read about other Olympics UNT connections.

In November 2015, Emrich received another chance for national exposure when ESPN tapped him to do play-by-play for 20 televised college basketball games during the 2015-16 season. This season, he's calling 35 games for the network and he's doing play-by-play for many college football games as Westwood One's No. 2 radio voice.

Emrich says the Olympics and his upcoming travel schedule for college football and basketball led him to leave KESN-FM in July, after nearly six years.

"I always wanted to do play-by-play. I was drawn to the energy of sports, and I wanted to be the person who could share that with an audience," he says. "I never had dreams of being an athlete myself and a star on the field or the court. I played just one year of Little League, and that was my only experience with competitive sports."

But sports was always a big topic in Emrich's family while he was growing up. His father, Roger Emrich, is the longtime afternoon sports anchor for KRLD-AM and 105.3 "The Fan."

"The earlier you start in this business, the better chance you have of getting that big break because experience is everything. And play-by-play is becoming more and more a freelance profession," Emrich says, noting that he may spend weeks learning about a sport and its athletes before calling the event.

His favorite sport to announce?

"I usually say my favorite is whatever sport is in season, but I'd be lying if I didn't say football," he says. "I've been a huge fan since I was a little kid. As a Texas boy, how could I not?"