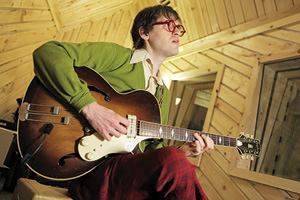 For his album Lamar, guitarist Brad Allen Williams ('03) wanted an honest capture of a musical moment -- three musicians playing together in one room in half a day without rehearsal. Lamar received praise from The New York Times and other reviewers. Besides session and songwriting/arranging work, he produces and mixes records primarily at The Bunker Studio in Brooklyn.

He said his time at UNT, where he studied jazz guitar performance, helped create a network and taught him all aspects of performance, from copying charts to conducting.

"There was a basic sense of personal responsibility and professionalism that was instilled by the staff across the board," he says. "That has paid major dividends."