The Mean Green win the Heart of Dallas Bowl 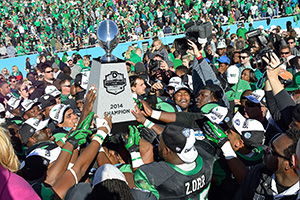 UNT kicked off 2014 on a high note thanks to the Mean Green football team's 36-14 win over the Rebels from University of Nevada, Las Vegas, in the Heart of Dallas Bowl. The Mean Green beat UNLV, of the Mountain West Conference, on New Year's Day to win their first bowl game in more than a decade.

It was also UNT's first bowl game appearance since 2004. The 2013 season marked the 100th anniversary of the start of Mean Green football as well as the first year competing in Conference USA. The bowl game win capped an excellent regular season with an 8-4 overall record and a 6-2 conference record.

UNT was the only university in the Dallas-Fort Worth area to earn a bowl invitation this year, a proud moment for the Mean Green Nation. Thousands of fans turned the Cotton Bowl and downtown Dallas into a sea of green New Year's Day. Go Mean Green!