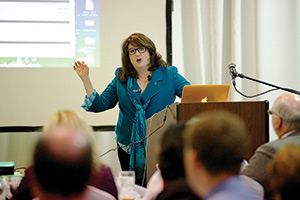 Being nerdy has its perks. For Beth Ziesenis ('90) it's helped her earn recognition as one of the favorite speakers of 2014, chosen by meeting professionals in Meetings & Conventions magazine. The list features renowned speakers such as former President Bill Clinton and Olympic gold medalist Apolo Ohno. Known as "Your Nerdy Best Friend," Ziesenis is a full-time blogger, professional speaker and author.

"I get to nerd for a living. It's a thrill to share technology finds with others," says Ziesenis, who lists Flipboard and Tagxedo among her favorites.

She attributes much of her success to opportunities as a student front-page writer for the North Texas Daily. She earned her degree in psychology and values the life lessons her journalism elective courses and faculty mentors Richard Wells, Roy Moses and Keith Shelton taught her.

"All the real-life experiences I gained at UNT through the journalism classes I took are really what shaped some of my abilities," she says, "such as talking to people, speaking in front of a crowd and being more outgoing."

In addition, working for the North Texas Daily helped kindle her interest in technology. Rogers Cadenhead, a fellow student journalist, set up instant messaging -- a new concept at that time -- in the newsroom, which made communicating much more efficient. Ziesenis was fascinated with how technology helped revolutionize the way the newsroom operated.

After graduating from UNT, Ziesenis earned her master's degree in journalism from the University of Alabama, served as a U.S. Peace Corps volunteer in Mali, worked on a dude ranch and started her own business as a freelance writer. She began writing books, became a public speaker and empowered people through apps and other new technological tools.

Her passion for helping others find and use technology to make their lives easier is what keeps her going -- and makes her nerdy.

"There's nothing wrong with being a nerd. In fact, it should be celebrated," says Ziesenis, who hopes to write fiction someday. "Nerds are popular now. We're finally getting dates, thank you very much."