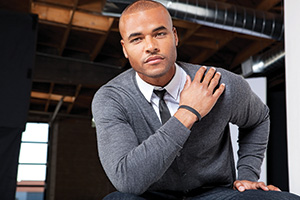 Redaric Williams compares his time at UNT to a marriage.

"I got memories and a ring," he says.

He earned that ring as a member of the Mean Green football team that won the 2002 New Orleans Bowl. And his experiences helped lead him to a role on the CBS soap opera The Young and the Restless.

The actor, who attended UNT from 2002 to 2004 as Jimmie Williams, wanted to pursue a professional football career, but he was sidelined by injuries. He then realized he wanted to pursue a career in acting. He had taken theatre classes in high school and at UNT.

"If you're going to embark on something that's not guaranteed," he says, "what's going to sustain you is your passion."

He worked in independent movies, commercials and modeling jobs — then, after auditioning last year, won the role of Tyler Michaelson on The Young and the Restless.

He'd like to pursue producing or directing in the future.

"There's really no ceiling," he says. "There are so many things you can do in this industry. It's creating to the fullest extent."