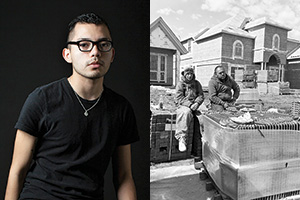 The assignment: take portraits on a view camera.

Jonathan A. Molina-Garcia ('14) ran away with the idea, creating a documentary photography project depicting labor workers in West Texas. The project helped him win the Jack Kent Cooke Graduate Arts Award -- worth up to $150,000.

"Going into graduate school with that kind of validation really means a lot," he says.

The project took shape in the studio arts class of Pavel Romaniko, assistant professor of studio arts. Molina-Garcia first photographed his brother Elmer, a roofer. He then shot his parents, who work as house painters in Odessa. His father is from Mexico and his mother is from El Salvador, so the project allowed him to look at the notions of identity in the United States. He used a 15-pound large-format camera instead of a quicker digital camera.

"I wanted something that really forced me to be meditative about the work that I was doing," he says.

Molina-Garcia plans to attend the California Institute of the Arts in Valencia, Calif. Inspired by his UNT mentors, he would like to teach at the college level while continuing his photographic endeavors.

"When I think back about my time at UNT, I think of everything in context: the semester in which I paired a sculpture class and one of my senior-level photography classes; the semester I took a class on colonial Mexican art and a class on experimental film; the time that was spent talking to my group of artist friends, discussing our ambitions, our complaints, failures and successes," he says. "At a certain point, you stop seeing yourself as an outsider to the community and you are entrenched in an environment that wants to unconditionally support your ideas."