Alumni continue UNT's rich legacy in education -- as teachers, counselors, superintendents and policy makers -- sharing their knowledge and inspiration with students and peers. 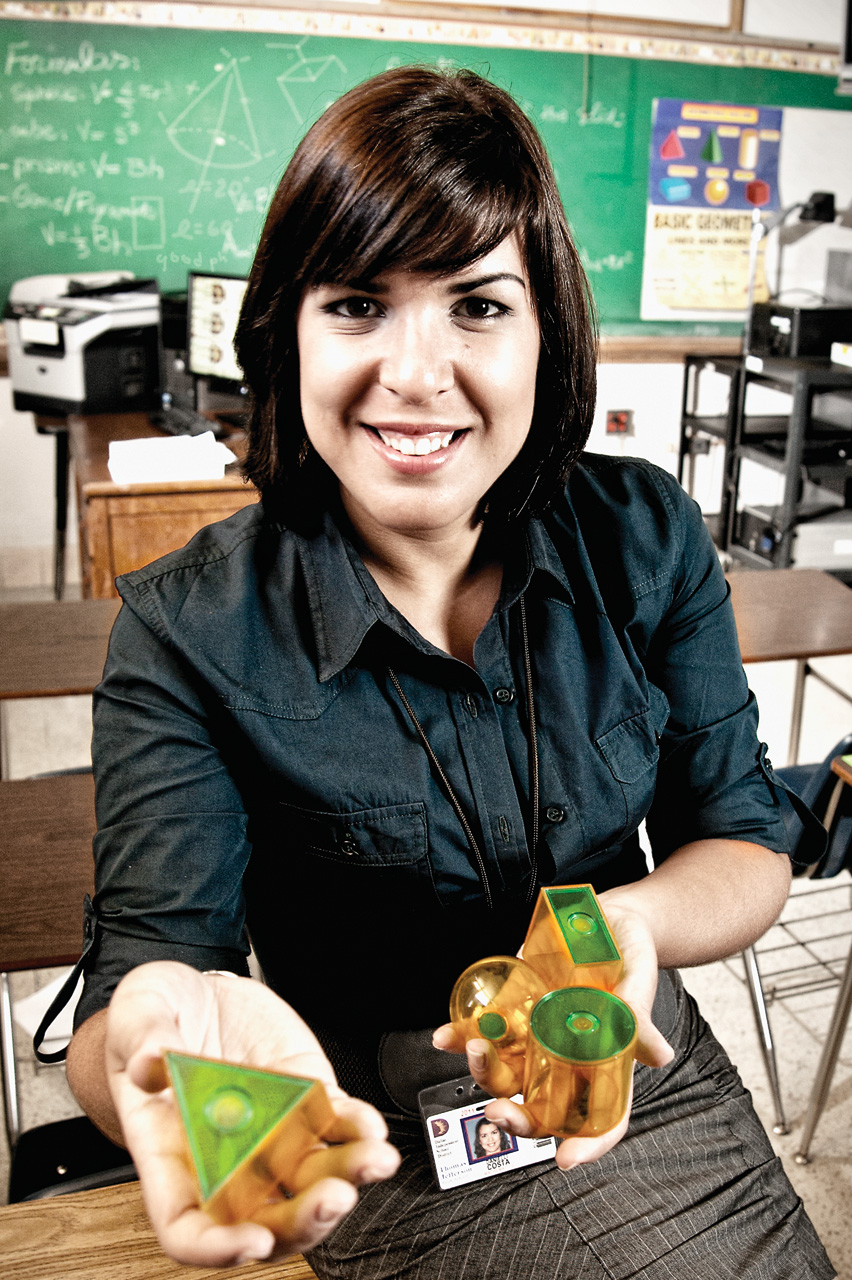 Danielli Costa ('11) knew she was taking on a tough job when she was hired to teach math at Thomas Jefferson High School in Dallas last spring.

Her students had already had five teachers that school year and were about to take Texas' important standardized tests, which would determine if they could pass to the next grade. Thomas Jefferson, a school on the rise, has had some tough circumstances. Nearly 85 percent of its students are economically disadvantaged, 78 percent are considered "at risk" and 36 percent have limited English proficiency.

"I was very prepared," she says. "By being exposed to new styles of teaching at UNT, I've been able to help my students be successful both in my classroom and in life."

Teach North Texas is just one of many ways UNT has been a leader in excellence and innovation in the world of education, starting in 1890 when it began as a teacher's college and continuing today as it trains administrators and researchers, and creates specialized programs for educators.

UNT graduates become certified as teachers at high rates. In 2010-11, UNT had the second highest number of teachers from a Texas university — 1,147. But more importantly, more than 72 percent of UNT's teaching graduates remain as teachers in Texas after five years on the job, the highest percentage in the state. That's critical when nearly 50 percent of teachers leave the job after five years, according to the National Commission on Teaching and America's Future.

The education world has noticed UNT's College of Education successes. Teach for America, the prestigious national program that takes teachers into low-income communities across the country, tapped eight recent UNT graduates for the 2012-13 school year. U.S. News & World Report ranked UNT's counseling program 12th nationwide and the first in Texas in 2012. And national organizations have bestowed awards and high-ranking positions on UNT education alumni, including principals, superintendents and college presidents. UNT graduates conduct research that is used by the Texas Legislature to set state education policy and best practices. The Center for Play Therapy provides the largest play therapy training program in the world, with graduates duplicating the program at other universities around the globe. And innovative bilingual programs are being created to meet changing demographics.

Even with all of these achievements and special programs, educating the educators comes down to the basics, says Kathryn Everest ('80, '90 M.Ed.), a former teacher and counselor who also earned her mid-management/administration certification from UNT in 2000. She serves as director of guidance and counseling for the Fort Worth ISD and sits on the State Board of Educator Certification, which monitors the teacher preparation program.

One classroom to another

When Costa entered her classroom, she knew what to expect. As a student teacher, she learned about curriculum and planning lessons, with opportunities to teach those lessons at different schools. But the Teach North Texas faculty provided her with subtler teaching techniques that would serve her well, too.

John Quintanilla, professor of mathematics and co-director of Teach North Texas, often asked offbeat, sometimes difficult questions that students pose and then would have the future teachers answer them as practice, Costa says.

"One of my students asked me a question about statistics," she says. "So, to get him to think it through, I asked him, ‘What do you think?' And he answered his own question." 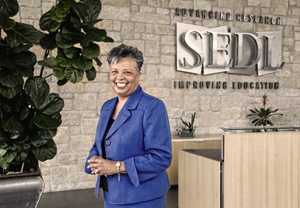 UNT's Teach North Texas program was initiated with $2.4 million in grants from the Greater Texas Foundation and the National Mathematics and Science Initiative and further supported by the Texas Instruments Foundation. The program began in fall 2008 as a partnership between the College of Education and the College of Arts and Sciences and prepares students to teach science, technology, engineering and mathematics.

UNT has been a leader in developing innovative education programs, going back to 1914, when it became one of the first colleges in the nation to offer a professional development model by establishing the training, or demonstration school.

As a student in the 1970s, Stella Cook Bell ('73) says her professors emphasized that kindergarten would be an important and growing field, as early childhood education was proving to help increase the learning of disadvantaged students prior to entering elementary school. UNT's training also was holistic and interdisciplinary, with instruction in the social, emotional, intellectual and physical aspects of students' lives.

"I learned the importance of educating the whole child," says Bell, who went on to earn a doctorate and worked 29 years as a teacher and principal in the Austin ISD. 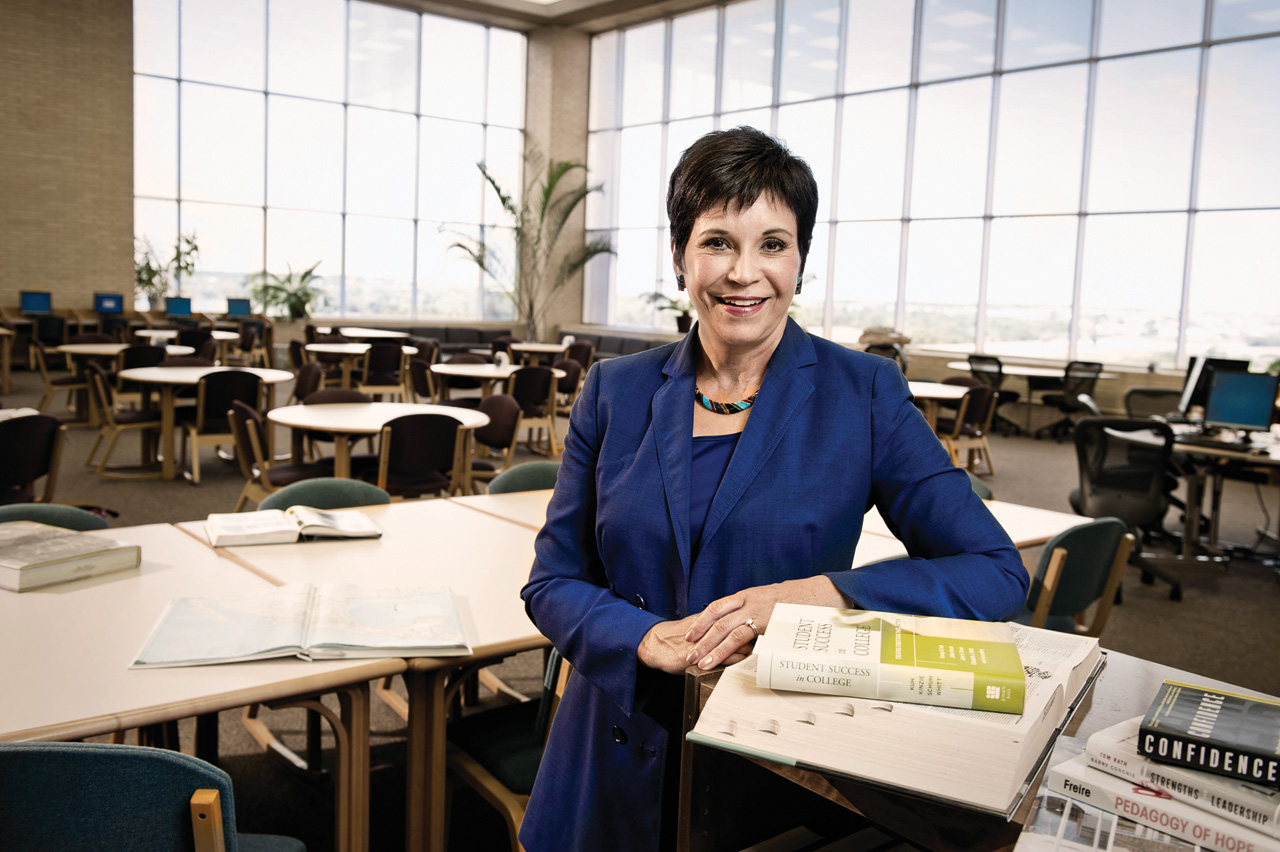 During that same decade, Elva Concha LeBlanc ('75, '78 M.Ed., '86 Ph.D.) earned her bachelor's degree, then went to work as a kindergarten teacher in the Fort Worth ISD. In the evenings, she pursued her master's in early childhood education and Spanish literature.

LeBlanc — now president of Tarrant County College's Northwest Campus — tested theories she was learning in class at her job, creating an environment for active learning by arranging the classroom into centers for art, math, books and pretend play. She also understood the importance of assessing student progress and preparing portfolios to identify areas in which students needed additional support.

"It made quantum sense," she says.

Principal's office and beyond

Teachers who want to advance to higher levels — whether as counselors or administrators — often are taught at UNT by working professionals who give them a first-hand look at the world they're pursuing.

Adjunct professor Andra Penny ('73, '76 M.Ed., '96 Ph.D.) says one of the first questions she asks the graduate students who take her educational administration, communication and finance courses is, "Are you sure?"

Penny definitely knows the field. She taught elementary school for 20 years and has been principal for Cottonwood Elementary School in Coppell for 16 years. She also teaches courses on teaching, learning and assessment at the Summer Principals Academy at Columbia Teachers College in New York City and Tulane University in New Orleans. She has served as president of the Texas Elementary Principals and Supervisors Association.

Most of Penny's students are professionals, so she says she can relate to them.

"I can identify and understand what they're going through." 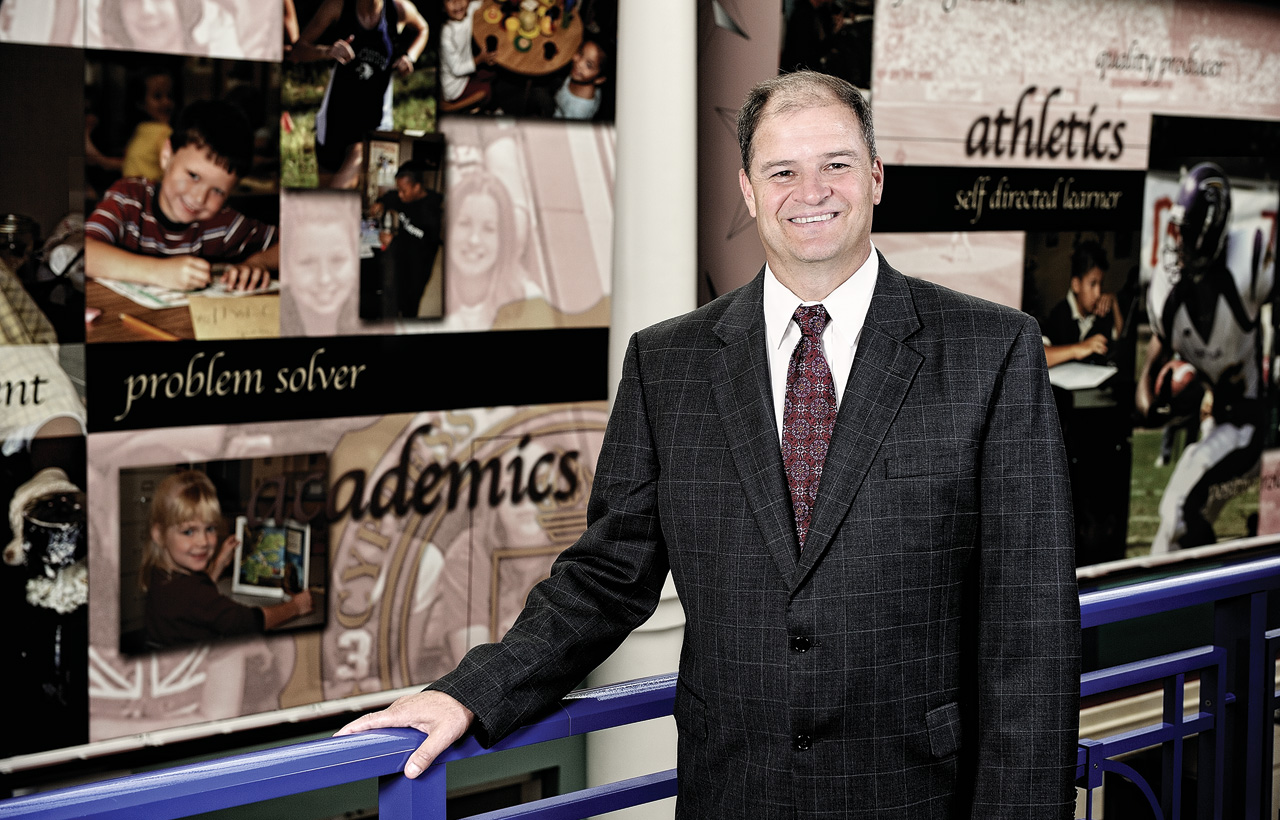 UNT graduates serve as superintendents in various districts in Texas. Mark Henry ('89 M.Ed., '92 Ed.D.), a superintendent for 20 years, in 2009 was a finalist for Texas Superintendent of the Year and was named Association of Texas Professional Educators Texas Administrator of the Year.

He was a 27-year-old teacher and coach when he was observed by Watt Black, founding director of the Meadows Excellence in Teaching Program at UNT, and Black suggested Henry go into educational leadership. Henry heads Cypress-Fairbanks ISD in the Houston area -- the third largest school district in Texas and the 25th largest in the nation.

"I went through North Texas at the best time ever," he says. "It was a good mix of career and adjunct professors giving me exposure to everything I would need coming from a superintendent's perspective." 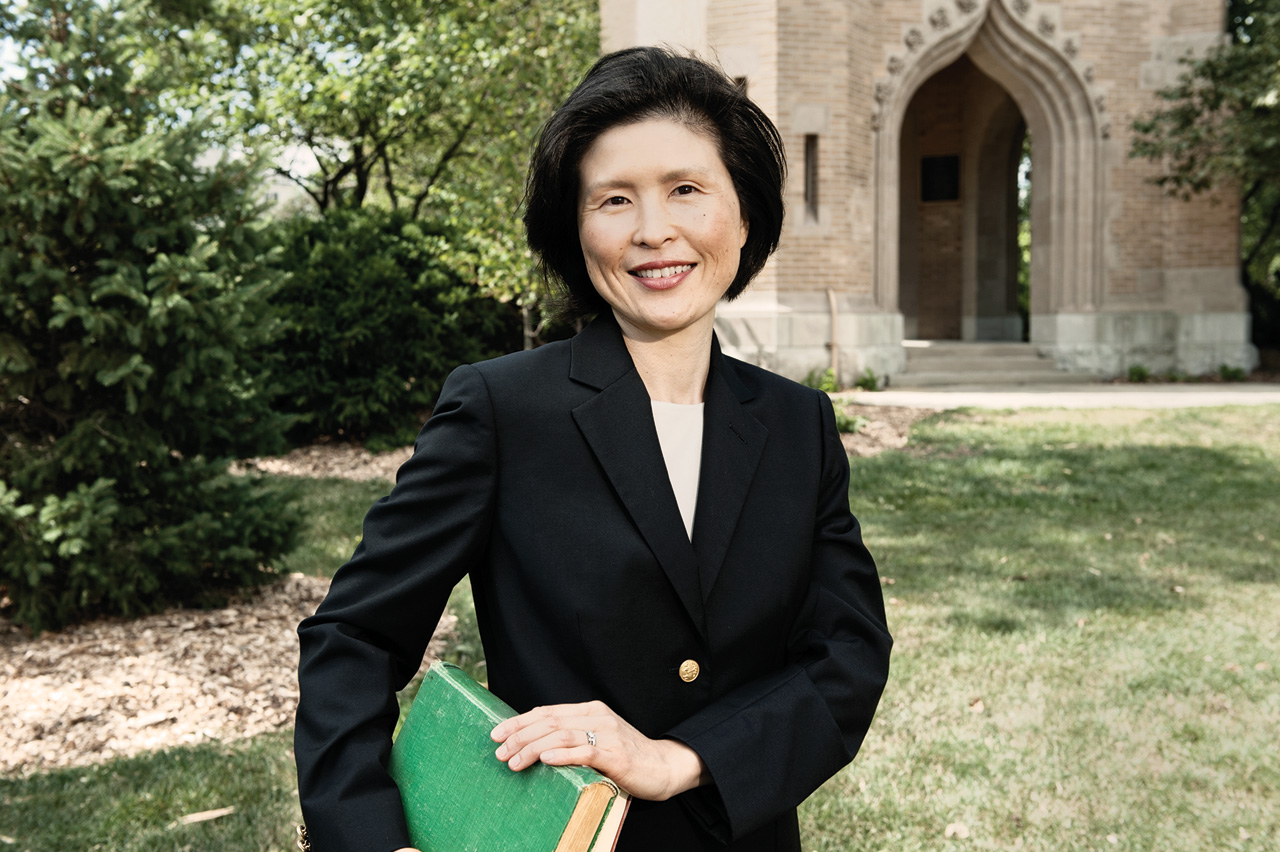 UNT also prepares researchers and educators in higher education. Soko Starobin ('96, '98 M.Ed., '04 Ph.D.) saw how research could be a powerful tool as a research associate at UNT's Bill J. Priest Center for Community College Education, which prepares leaders and teachers for specific careers in community colleges.

She studied higher education policy under Stephen G. Katsinas, the inaugural director of the center, and learned about students' access to college and success, including how the maximum amount of federal Pell grants given to students was not enough to pay for all college expenses.

Starobin also learned how colleges develop targets for student retention and graduation rates as part of the Closing the Gaps Higher Education Plan.

"Eventually, those policies informed by the research are going to affect individuals in higher education," she says. "That excited me."

Starobin, now assistant professor of higher education and director in the Office of Community College Research and Policy at Iowa State University, focuses on the impact of community colleges. Her work was recognized with the 2010 Barbara K. Townsend Emerging Scholar Award from the Council for the Study of Community Colleges.

She says her education at UNT was helpful because she got to work with many administrators at Dallas-Fort Worth community colleges.

"It was quite an experience to see their roles in executing their institutional policies," she says. "That's the learning I couldn't get in the textbook."

Gabriela Borcoman ('04 Ph.D.) works as a senior program director for the Texas Higher Education Coordinating Board in Austin, where her research is read and used by some of the most influential leaders in the state and in education.

"Legislators want to know a lot of information," she says. "When they work on a bill, they need research."

Bell, the former teacher and principal in Austin, now works at the Texas Comprehensive Center, where she disseminates research so teachers can use effective strategies — such as collaborating with their colleagues to align curriculum, instruction and assessment to state standards.

"These efforts need to be mutually supportive for student achievement," she says.

While UNT has a long and rich history in successfully educating educators, it continues to set new goals, says Jerry Thomas, dean of the College of Education. In the past decade, the college has produced 548 doctorates. It also has increased its grant funding so it now brings in as many grant dollars as faculty salary dollars to support research and innovative educational programs that have worldwide impact.

And UNT is keeping up with the nation's rapidly changing demographics through its bilingual/ESL program. The Future Bilingual Teachers Academy hosts a summer camp for Hispanic high school students interested in pursuing a career in bilingual education.

With her math and bilingual background, Costa fits the attributes of the teacher of the future. Just as UNT prepared Costa for teaching, her students were ready for their standardized tests. More than 95 percent of her freshmen passed the state tests.

"That feeling," she says, "is more rewarding than anything."