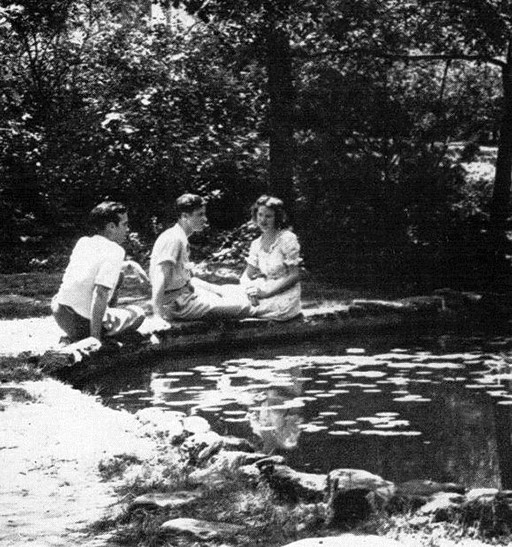 The fish pond ("Places on campus," summer 2012) certainly has special memories for me. I grew up across the street on Avenue B. My parents owned a large rooming house and a grocery and school supply store, later with a cafe.

The campus was my playground as a child. We caught tadpoles at the pond in a fruit jar and watched them grow into frogs. We attended the Demonstration School on campus, and the pond was a part of our science studies. It was a splendid place to grow up.

As a college student, I spent time on the park benches with boyfriends. We discussed the future and our dreams. This shady area was my own "secret" place.

The pond was a wonderful little oasis on the way to the old English building!

Once in 1964, I carelessly dropped a beautiful and rather old Bulova wrist watch in the water there. I was so devastated, I didn't even bother to "fish" it out.

The same year, I ran into a young lady there who had gone to elementary school with me 10 years before. She had come up from San Antonio to attend North Texas — memories that have not crossed my mind in 48 years, until the summer North Texan arrived! 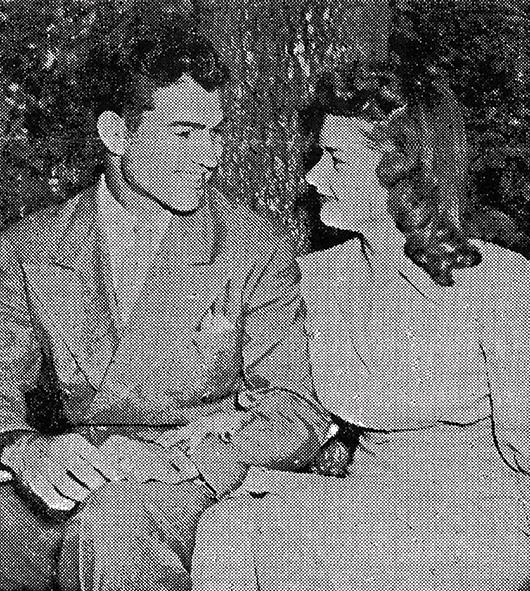 I remember the campus fish pond very well. It was the "courtin'" spot of choice back in 1943-1947 during my years as a student.

There weren't many men around to court in those war years — but that all changed by fall 1946 when the guys returned in large numbers.

My future husband Harold Davis and I had our photo taken on a bench near the pond in 1947.

The picture of the fishpond in the summer issue doesn't look at all like the goldfish pond I remember on the campus from the early 1950s. The pond I remember was small — maybe 8 or 10 feet in diameter.

It was located west of the Power Plant building, northeast of the old Music Building, along the walk from the English building on Hickory Street toward the old Union Building on Chestnut Street.

It was round and ringed with sandstone, quite picturesque under the oak trees. The pond was a favorite stop on my way from where my father, Price Truitt, taught chemistry (in the Science Building on the corner of Hickory and Avenue A) to the UB.

I arrived at Kendall Hall as a freshman in the fall of 1962. My roommate and I shared a third-floor room, and of course, shared a bathroom with many other girls. She married after our freshman year, but I remained at Kendall, eventually securing one of the coveted rooms with a private bath. That was luxury!

It was at Kendall Hall that I learned of the assassination of President John F. Kennedy. We girls clustered in the living room and listened in disbelief as Walter Cronkite announced the president's death. When the pipes froze one winter, many of us walked across the street to shower in the girls' physical education building. Our dorm mother, Mrs. Pipkin, made blue garters for those of us who became engaged while at North Texas. Mine was handed down to my daughter, and my granddaughter hopes to wear it one day.

Our curfew on week nights was the odd hour of 10:50 p.m. I was late only once, and had to appear before Dean Imogene Bentley and endure the punishment of being campused for two weeks. Even though I pledged Alpha Phi sorority my sophomore year, I opted to remain at Kendall and did not move to "the ramp" until my final semester when I began my student teaching.

I cherish my years at North Texas and, of course, Kendall Hall.

In the fall of 1971, I signed up for a dorm room in Kendall Hall. It was cheaper than other dorms and I liked the way it looked. The components were brick and stone, lovely colors. It had good bones. What was very interesting was the form of communication once you were inside the building. (This was way before cell phones). There was an object on the dorm room wall that resembled a two-hole socket, but upon close examination, it was two mechanical push buttons.

Each room had two girls assigned to it and a buzzer system. You and your roommate chose who would be one or two buzzes and this was logged in at the RA’s desk. After the first set of buzzes sent to your room, you determined who the RA was trying to contact. Then, another set told you if you had a visitor or a phone call downstairs. Oh, yes, there were phones at the RA’s check-in desk. And, there were several pay phones by the front doors. Then, you had to respond by buzzing your code to answer the RA’s message so she could inform your visitor or the person on the phone if you were there or not.

And then, there was a “first semester freshman” status with a curfew — ah, but that’s another story.

The pond was such a peaceful spot to pause — if one had a few minutes — to watch the fish or students (girls) passing by or maybe linger over a book or with a friend. As an art major, I passed the pond often, going to or from the Library where the art department was housed, to the Post Office to check mail, to the History Building or the Main.

For a semester, I lived in Olive Johnson’s home across from the History Building, with Bob Toulouse renting the other bedroom. The “museum” in the History Building was a dusty and wonderful collection of sometimes strange artifacts and, sadly, often ignored by most students.

Not many, however, ignored the Saturday Night Stage Show and movie in the auditorium in the Main. Not many students had cars, and the Goose stopped running before the movies downtown were over, and not many could afford a Saturday night in Fort Worth or Dallas. The auditorium also was where plays, the opera workshop performances and lectures by visiting luminaries took place. After the pipe organ was installed, the organ students gave their senior recitals there. The Main really was the main place on campus.

One of my favorite places, though, was off campus, a block or so south. I seem to recall it had once been a Boy Scout meeting hall  — a long, two-room stone building where overflow art classes were held. Ronald Williams' illustration class was conducted in the front room. In the back room, Carl Compton had his painting classes and a personal workspace in a back corner.

It was a neat, compact and very special little world then, back when we celebrated reaching 5,000 students.

I don't remember a pond on the campus grounds, but I do remember the pond on the old golf course where we threw our fraternity brothers (Chi Sigma Phi and, later, Sigma Nu) when they "pinned" their sweethearts.

Mine was Bettie Johnson, class of '54. We were married in 1953 and are still going strong after 58-plus years. We had some great times over coffee at Dyches' Corner Drug store and dancing at the jam sessions at the UB to the music of 'Fessor Graham's Aces with Pat Boone singing.

I have such special memories of campus that have lasted a lifetime. I remember the new Student Union Building (the SUB as we called it) being built during the years I was on campus (1965 to 1969). I remember the "new smell" that lasted a long time and enjoyed my daily trips to pick up my mail.

My first dorm was Bruce Hall across from the Music Building, and because we did not have air conditiong in those years, we were frequently "serenaded" by the lab bands and the music majors that were practicing. It was better than having a radio! Our room window was next to part of the roof, and we would fry potatoes and fish in our popcorn popper there on Sunday nights when the dorm dining room was closed.

Some of my fondest memories are of my senior year, spent in the Chilton Hall sorority ramp. Delta Zeta was the first sorority to be allowed to come on campus in 40 years and we appreciated so much the responsibility that we had. Our sponsor was Bess Townsend, a professor on campus. Chilton Hall had a lot of character for an old building and witnessed many "short sheetings" and other pranks.

Many afternoons during the 1969 fall season also found our P.E. Play and Playgrounds class on the side yard of the campus elementary Demonstration School. Joe Hamilton, "Mean" Joe Greene, Cedric Hardman and the rest of us in the class were a comical sight playing those children's games in that yard. I will always treasure those special times with special people and be forever grateful that I was given the opportunity to experience them all. 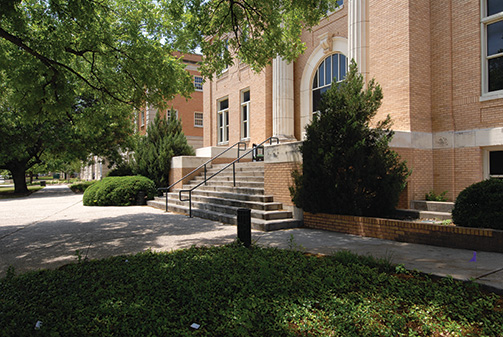 The speech and drama department was housed in the Historical Building in 1959-1962 while I was a student. I remember doing lighting for plays in the very small basement theater. We later did radio progams in the radio control room and studio there, although in those days the signal only went on tape for classes to hear.

The old Student Union Building was where we did dinner theater and I learned to serve tables and do lighting in a theater in the round. I also recall the theater shop on Maple Street where we constructed and painted sets before moving them to the performance venues.

The facilities were not impressive then, but the training has lasted me a lifetime and has been useful in every career I've had. 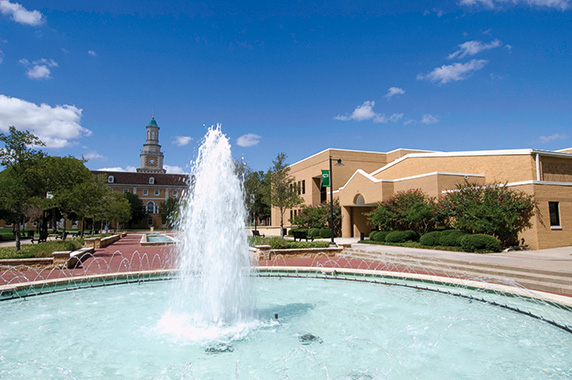 Editor's note: Thank you for all the responses to our request for memories of the fish pond, Kendall Hall and other favorite campus spots. Several readers asked about the fate of the pond. The General Academic Building sits in that area now, but students do have new water features to enjoy such as Jody's Fountain in Onstead Plaza. We think they also may have found other courtin' spots.