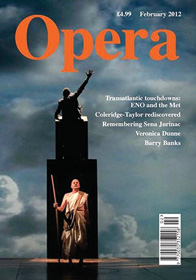 Richard Croft, professor of music and renowned tenor, received many accolades — including the cover of the February issue of Opera magazine — for his work as Gandhi last fall in the New York Metropolitan Opera’s production of Satyagraha. Croft shaved his head and lost weight to take on the role of the Nobel Peace Prize winner, which he also performed in the Met’s 2008 production.

“Richard Croft had deepened his already profound Gandhi, singing with a beauty befitting Monteverdi: this was surely some of the most gorgeous male vocalism in recent Met decades,” reviewer David Shengold wrote in the magazine.