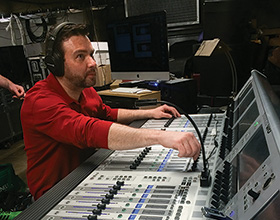 Tom Burlin ('09 M.M., '15 Ph.D.) has gone to schools and festivals and worked with some of the biggest names in music for his doctoral research. His topic? A cappella.

Burlin, who earned his doctorate in music education with a specialization in sociology, directs the Estudiantina singing and guitar-playing ensemble program at the World Languages Institute of Fort Worth ISD. He wanted to know how to teach the kind of a cappella music -- group or solo singing without instrumental accompaniment -- that gained popularity on TV shows and movies like Glee and Pitch Perfect.

In his research, he found that when creating songs and arrangements, students often work democratically and learn about each other, then they use each other's talents and skills in music-making as well as in social and organizational capacities.

"Maybe members of new high school groups will not look at YouTube for inspiration and to sharpen their skills but each other instead," Burlin says.