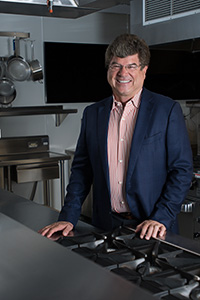 "Does the outside match the inside, does the menu fit the inside with item selection and pricing, and does it all add up to be greater than the sum of the parts?" he asks.

Answering those questions is part of the job for Cardwell, president of Cardwell Hospitality Advisory Inc. in Dallas, who has more than 35 years of experience in the hospitality industry.

He held senior positions with S&A Restaurant Corp., which operated chains such as Steak & Ale and Bennigan's, founded in the 1960s and '70s. More recently, he was president of P.F. Chang's China Bistro and EatZi's Market and Bakery, and was CEO of Boston Market.

Now, since founding his own consulting firm in 2013, he helps CEOs and restaurant management teams increase sales and strengthen their brands by guiding them through the competition and helping them to capitalize on industry trends. He has helped develop dozens of different restaurant concepts, such as Romano's Macaroni Grill and Pei Wei.

"Chains are expected to have a strong brand identity," Cardwell says. "And if your franchise hasn't done anything during the last five years to address healthy eating, you're a flop."

Get to know
Lane Cardwell

Read a Q&A with Lane Cardwell

Cardwell, who's also a member of the boards of directors for Ruby Tuesday Inc. and Shari's Restaurants, says he spends about three hours a day reading articles on current trends and seeks out knowledge from fellow employees.

"I never had a job in a restaurant as a waiter, cook or bartender," he says, "but I've spent hours and hours shadowing employees in the chains I work with."

Cardwell also shares his knowledge with hospitality students. As a founding member of the Board of Governors for UNT's College of Merchandising, Hospitality and Tourism's hospitality management program, he advises faculty on teaching and internship experiences that students need and helps raise funds for the college. And as an Executive-in-Residence Lecture Series speaker for the college in 2011, he shared his professional experiences with students.

"I love catching a glimpse of how students are working toward their careers," says Cardwell, emphasizing the importance of getting experience in the field. "Internships bring classes to life."

Joyce Duesman, former senior manager at Pepsico Food Service, has worked with Cardwell as a member of the Board of Governors since 1997 and speaks of his impact on the industry as a mentor.

"Lane has employed many who have gone on to become leaders in the industry themselves," Duesman says. "He has helped others start their restaurant concepts and realize their dreams."

And he's seen the change in industry.

"If you had an idea during the '70s and '80s, the barrier to entry into the industry was low, but today, the bar for success is quite high," he says. "It's difficult to become successful without brand cohesion."

He reminds those who want a career in the ever-changing restaurant industry, where "you can't possibly know what the future will have in store," to "learn as much as you can."