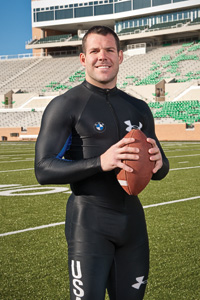 Whether he’s training with Team USA Bobsled with an eye toward the Olympics or expanding his business into Europe, Johnny Quinn (’06) is focused on the future.

Growing up in McKinney, Quinn knew he wanted to play professional football one day. In his senior year of high school, he led the state of Texas in receptions. He came to UNT in August 2002, and his success as a student-athlete led to his induction in UNT’s Athletics Hall of Fame this fall.

Quinn is the all-time leading receiver in the history of Mean Green football with 2,718 yards and ranks third in all-purpose yards with 3,835. He was a three-time all-conference selection from 2004 to 2006.

“I’m very fortunate and blessed,” Quinn says, adding that many people aren’t aware of his experiences with UNT track and field. “I walked onto the track and field team and that was really humbling for me, because the first two years I took last place in every event I ran in. It helped me learn to run, though, and competing in the spring really set me up well for football season.”

After graduating, Quinn played for the Buffalo Bills and Green Bay Packers. He later spent a year with the Saskatchewan Roughriders in the Canadian Football League but was cut after injuring his knee in the last game of the 2009 regular season.

His injury didn’t slow him down. Less than a year later, he was invited to Salt Lake City to try out bobsledding once team trials had concluded. But one of the brakemen at the trials was over the weight limit, so Quinn instead flew to Lake Placid, N.Y., the night before the four-man trials.

“My first push ever was on ice. My team finished third and I’ve been bobsledding ever since,” says Quinn, who has been sliding in Switzerland, Italy, Austria, France, Canada and Germany, as well as the U.S. He says if he can continue to afford the sport, he plans to compete for a spot on the 2014 Olympic team.

When he isn’t barreling down an icy course, Quinn works as the founder and president of The Athlete Watch, giving young athletes a web-based platform to market themselves to colleges.

“The passion behind The Athlete Watch is to help kids who have the hopes, dreams and desires of playing at the next level, just like I did,” Quinn says.

The company provides the athletes with a profile containing their academic, athletic and personal information, sports action photos, and the option of video content. They can then take their profile and get in contact with universities nationwide. The company is based in McKinney and also has locations in Kentucky and Wisconsin. In September, it expanded into the U.K.

“In addition to being one of the most dedicated and hard-working athletes I have had the pleasure to work with in my career, he was a very conscientious and successful student,” Villarreal says.

Today, Quinn is putting that dedication toward his bobsledding career.

“We’ve got three years until the Olympics, so a lot can happen,” he says. “I have to continue to improve as a push athlete, and if I do that, I will have a chance to make the team. That’s all you really want as an athlete, that chance.”

​Read a Q&A with Johnny