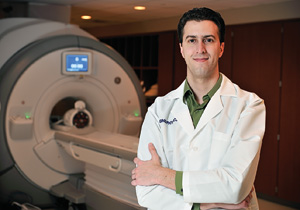 Ryan Bosca says he had no specific goals for a future career when he was invited to become an Honors student as a sophomore. He did well in Advanced Placement physics in high school, and so decided to become a physics major at UNT — without understanding what he could do with a physics degree.
“I just went with the flow, took my core curriculum classes and did well enough my first year to receive a letter about the Honors program,” he says.
He soon discovered that his Honors professors were “able to bring out sparks of curiosity and get students actively participating in the class.”
“I can’t think of a single Honors class in which I wasn’t engaged and actively learning,” he says.
Now a doctoral student in medical physics at the University of Texas Health Science Center in Houston, Bosca says a political science Honors class taught by Frank Feigert, now a Professor Emeritus, sparked his interest in research.
“I did a research paper for class that ended up being longer than my Honors thesis. I enjoyed being able to find answers to questions,” he says.
After taking Honors 1500, Introduction to Research, which helped him understand what he could do with a degree in physics, Bosca contacted Duncan Weathers, associate professor of physics, and began conducting research in the Ion Beam Modification and Analysis Laboratory. He also participated in two Research Experience for Undergraduates summer programs in UNT’s Department of Chemistry, exploring physical properties of hydrogels while being mentored by Zhibing Hu, Regents Professor of physics.
The ion beam research became Bosca’s Honors thesis, and in addition to being published in The Eagle Feather, it was published in the proceedings of the 2006 International Conference on the Application of Accelerators in Research and Industry.
Bosca received bachelor’s degrees in both physics and mathematics with Distinguished Honors, and stayed at UNT to earn his master’s degree in physics. He’s planning to work in a research job at a large academic hospital after receiving his medical physics doctoral degree in 2013.