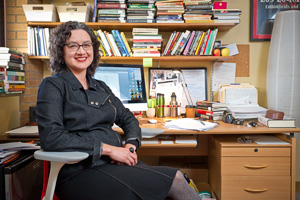 Before she decided to enroll in UNT and the University Honors Program, now the Honors College, Priscilla Ybarra was recruited by several other universities. But she decided to enter UNT, which she chose for its journalism program. And 13 years after receiving her UNT degree, she returned to her alma mater as an assistant professor in the Department of English.
“I feel a very special connection to UNT,” she says.
Because both of her parents had limited opportunities for education, Ybarra didn’t know what to expect on a college campus. The Honors program, however, provided her with a community of students who were as high-achieving and motivated as she was about learning.
“I took classes with the same group of students in the Honors program, and we spent time together outside of class too. And the class discussions gave me confidence. I was one of the quieter ones of our group, but if the classes hadn’t been so discussion-oriented, I would never have ended up talking as much as I did in class,” she says.
She describes the professors of those classes as “very approachable,” and remembers that they often stayed after class to give her feedback on class assignments.
Some of those courses led to a new career direction for Ybarra. After taking a series of courses on post-colonial literature, she switched her major from journalism to English and entered UNT’s Ronald E. McNair Post-Baccalaureate Achievement Program to prepare for doctoral study and a career of teaching at a university. She researched the South African writer and political activist Nadine Gordimer for her senior Honors project, the forerunner of the Honors thesis in the Honors College.
“She was hard for me to figure out when I was reading her work in one of my classes, and she became the puzzle that I worked on my senior year,” Ybarra says.
She says Brian May, one of her Honors English professors, first suggested graduate school and “planted an idea that really began to grow” once she heard about the McNair program.
Ybarra attended her first academic conference — the conference of the South Central Modern Language Association — as a McNair student. After receiving her bachelor’s degree in English, she briefly attended graduate school at the University of California at Los Angeles before transferring to Rice University, where she earned master’s and doctoral degrees.
At UCLA, she developed an interest in Mexican American literature. Ybarra now specializes in Chicana/Chicano and Latina/Latino literature and theory as well as environmental literature and ecocriticism. She is writing her first book, Brown and Green: Mexican American Environmental Writing.