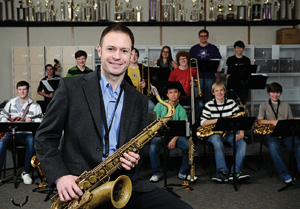 David Lown wasn’t particularly interested in the brochure about UNT’s Honors program that was mailed to him during his senior year of high school. The talented saxophonist had already decided to go to UNT, determined to earn a jazz studies degree from the College of Music and become a member of the acclaimed One O’Clock Lab Band.

“My parents had to twist my arm to convince me to be in the Honors program,” he says, adding that he had some fear about being in the program because he didn’t take many Advanced Placement classes in high school.

Now the jazz program director at Southlake’s Carroll High School says the in-depth, discussion-focused Honors classes “were good for my way of learning.”
“They aligned with how classes were taught in the College of Music,” says Lown, who had private saxophone lessons with Jim Riggs, then a Regents Professor of music.
While earning his jazz studies degrees, Lown not only performed with the One O’Clock Lab Band, but he also directed the Four O’Clock Lab Band and coordinated the group’s appearance at the Wichita Jazz Festival in Wichita, Kan. Lown also taught saxophone, both at UNT as a teaching fellow and as a private teacher in the Lewisville ISD.
The winner of the 2002 North American Saxophone Alliance Jazz Competition, he was a freelancer in New York City for several years, performing with the David Liebman Big Band, the Steve Haines Quartet, Bill Warfield’s New York Fusion Ensemble, and many others.
He returned to Texas in 2007 to become the assistant jazz band director at Keller High School, and began teaching at Carroll High School a year later. Under Lown’s direction, one of the school’s jazz groups was selected as the winner of the University of Texas at Arlington Festival in 2009 and 2011 and was a finalist at the Essentially Ellington competition in 2010.
Lown says the willingness of professors who taught his Honors classes to “listen to new ideas from students” has helped him in his own teaching.
“The teachers in the Honors College are similar to the best band directors,” he says. “Sometimes, teachers need to take a subject in the direction that fits the needs of students, and allow students to lead a discussion.”
Lown continues to perform in the Dallas-Fort Worth area with drummer Stockton Helbing and his quartet.