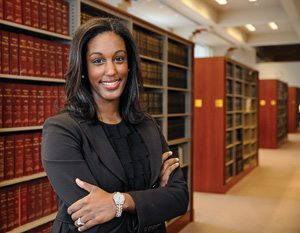 Winstead PC associate Aïda Wondwessen says she wanted to be a part of the Honors program at UNT from her freshman year.
“I enjoyed the big campus experience, and the smaller Honors classes gave me a small college environment. It was the best of both worlds,” she says.
She also discovered helpful professors.
“I learned how great it was to get to know my professors and get feedback on my thesis and papers. The professors would stay after classes to go over my drafts with me,” she says.
Wondwessen received the Department of Political Science’s Clovis C. Morrison Award for being the Best Pre-Law Student. That honor, her enrollment in Honors and her other achievements at UNT — including being chief justice of the Student Government Association Supreme Court — resulted in Wondwessen being admitted to Southern Methodist University’s Dedman School of Law, which gave her a $15,000 scholarship.
At the Dedman School, she was one of 15 students named to the SMU Barristers, an honorary service organization that selects members on the basis of scholarship, leadership, achievement and character. She was named a regional champion and national semifinalist in the American Bar Association’s Labor and Employment Trial Advocacy Competition and received the Best Opening Statement award at the National Trial Advocacy Competition. She also was the vice president of the Black Law Students Association.
Wondwessen has worked at Winstead PC since receiving her law degree in May 2010.
She’s grateful that the UNT Honors faculty and administrators were committed to helping her succeed and reach her goals.
“It’s a fantastic program,” she says.