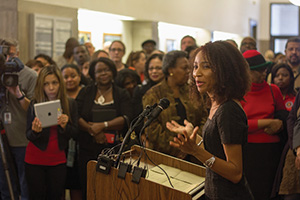 In 2003, the words "White Only," previously covered by a metal plate, were discovered above the water fountains in the Dallas County Records Building. Controversy erupted over what to do about the markings. A decade later, artist lauren woods ('02), who in following family tradition doesn't capitalize her name, has created the multimedia A Dallas Drinking Fountain Project to teach visitors about the significance of segregation.

Woods, who majored in radio/television/film and Spanish, received approval from the Dallas County Commissioner's Court in 2005 to create the project, and then spent nearly 10 years raising funds and getting it organized. The project was unveiled last fall. When people push for a drink, the water is withheld while a video projection shows newsreel footage of the protests from the 1960s in which law enforcement used water hoses against civil rights activists. Visitors can take a drink after the video.

"I strongly believe the discovery of the artifacts in this particular public context affords us a unique opportunity to reflect on the courageous activism of everyday citizens," she says.