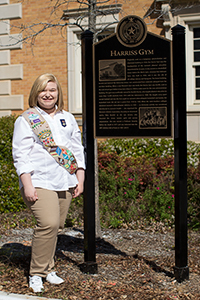 When Elise Clements was in the sixth grade, she researched and wrote a narrative for her Girl Scout Silver Award that led to a Texas state historical marker for Beulah Harriss -- the first recognized Girl Scout in Texas and the first women's coach and physical education instructor at UNT.

A campus historical sign also made possible by Clements -- who is now 15 -- was dedicated March 14 at the southeast corner of the Hurley Administration Building to commemorate Harriss and the building that was named for her, the Harriss Gym. The sign is near the location where the gym stood from 1923 to 1956.

Harriss, who started the first Girl Scout troop in Denton County, came to campus from Nebraska in 1914 to help organize the physical education department and coach women's sports. She later founded the Green Jackets spirit and service organization. She retired in 1960. The state historical marker telling her story is in Denton's Quakertown Park, near the former location of the Girl Scout Little House.

Clements was so inspired by Harriss' story that she also worked to revive Beulah Harriss Day (Feb. 27) in Denton, with a 2014 proclamation signed by the mayor. This year marked the fourth annual Beulah Harriss Day, and on March 14 Denton County judge Mary Horn presented the Denton Girl Scouts with a proclamation celebrating the 100th anniversary of the founding of their first troop -- the one organized by Harriss at what was then North Texas State Normal College.

The dedication for the campus sign, which Clements helped fund with money she raised, was sponsored by the UNT Division of Student Affairs and was open to the public. A scrapbook owned by Harriss and featuring many photos from her early days on campus is now accessible on the Portal to Texas History. 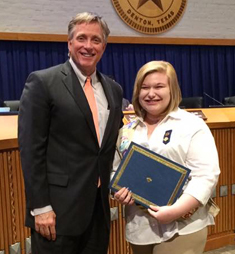 Originally used as a temporary administration and classroom building in 1923, the Harriss Gym was the headquarters of the women's physical education department for 25 years. It also served as a basketball venue before the Men's Gym, renamed Ken Bahnsen Gym, was built in 1950, and it was the site of all-college dances and banquets. The frame building, located just west of the University Union, was constructed from materials salvaged from the old Main Building. When a new Women's Gym was built, the Harriss Gym was briefly used as the Lab School gym before it was torn down in 1956 to make room for the new administration building.

The gym was unofficially named for Beulah Harriss, who taught physical education to more than 15,000 students from 1914 until her retirement in 1960. She taught every sport except football and was the first coach for women's intercollegiate basketball and tennis. Her basketball team did not lose a game from 1918 to 1920. When the state teachers colleges abolished women's intercollegiate athletics in 1925 -- as strenuous activity was considered detrimental to women's health -- she organized the Women's Athletic Association, focusing on intramural sports. "Miss Beulah," as she was known, also founded the Green Jackets spirit and service organization. She was named a Professor Emerita before her death in 1977 and was inducted into the UNT Athletic Hall of Fame in 1987. (2017)