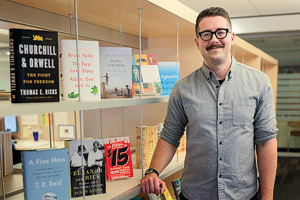 While Betty Lynch King ('01 M.S.) was studying for her master's degree in library science, her then teenage son, Christopher Brian King ('08), was wandering the halls of the Art Building.

"I felt like I fit in there," says King, who majored in communication design when he later attended UNT himself. "I knew I wanted to work in graphic design, but I also studied English literature and those classes really kindled my interest in working with writers."

King has created book covers for Doubleday and Melville House and is now a senior designer for Penguin Press. His work has been seen on covers for The Lake by Banana Yoshimoto and for The Last Interview series featuring portraits of such authors as Gabriel García Márquez, Ray Bradbury and Kurt Vonnegut.

"The hardest part is coming up with an idea, but thankfully I have some of the world's best writers providing my source material," he says. "Most of the cover ideas come from conducting research into the books' contents, and the best part is that every project brings with it a deep dive into a subject I didn't know about before. I learn so much from our writers and editors."