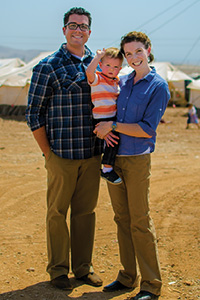 Not every woman has the chance to be a teacher, a traveler, a humanitarian and a mother, but when Sarah Nowery ( '05, '07 M.P.A.) took an opportunity to work at a refugee camp in northern Iraq in 2010 through Samaritan Purse -- an international faith-based disaster relief organization -- she knew her life would never be the same.

"I am assigned here with my husband, who also works for Samaritan's Purse.  We have one child and another on the way," Nowery says. "I love that I get to do this work with my family."

After working for USAID in Washington D.C. in 2007 during her last year in graduate school, Nowery landed a job as an international disaster advisor at Samaritan's Purse's headquarters in North Carolina.

"I worked to document their response procedures," she says, "and develop training for their disaster response volunteer teams."

During her time in North Carolina she met her soon-to-be husband, who was on leave from his assignment abroad with Samaritan's Purse. They now share their passion for helping others through assignments all over the world in countries such as Sudan, where they spent nearly two years on a project in the Nuba Mountains. Nowery has led volunteer teams and provided assistance to emergency response missions in Mexico, Ecuador and Darfur, Sudan as an international disaster advisor for the organization before relocating to Kurdistan, Iraq to provide relief for Syrian refugees.

As a deputy country director for Samaritan's Purse, Nowery manages the education programs at the community center, including women's literacy courses, livelihood training, computer courses and English classes. The center is located in the village of Shorsh, previously used in a resettlement camp for widows and orphans in the 1980s from Saddam Hussein's Anfal campaign, which included eight brutal attacks on the region, devastating 90 percent of Kurdish villages.

The plight of the Kurdish population of Iraq has not improved much over time. One of the Kurdish men who serves on staff with Nowery was taken to a refugee camp when he was five years old.

"He saw his father beaten daily and eventually saw him succumb to those beatings. He remembers his mother kissing him and then being taken away by some soldiers. To this day, he has no idea what happened to her," she says.

"Unfortunately, these stories are common to every household in our area."

Nowery became involved with the refugees after the crisis in Syria began and Syrian Kurds began to stream into the Kurdish region of Iraq. Many of them are women and children who came from well-educated middle class families. Due to the 2010 Syrian crisis, many now live a life they had never imagined for themselves.

"We admire the strength and tenacity of these people," she says. "It is always heartbreaking to see the innocent suffer."

Along with relief commodities, such as such as shoes, clothing, blankets, heaters and food, Nowery brings hope for a brighter future to the Kurdish refugees living amongst the sea of canvas tents and gravel-paved roads. Her literacy classes have helped many refugees learn skills needed to survive and receive an education, some for the first time in their lives.

She says relief efforts by Samaritan's Purse were not always accepted well by the Kurdish refugees, but over time Nowery has found the Kurdish people to be very kind and hospitable.

"We have seen that barriers are broken down when both the Iraqi and Syrian Kurdish families meet our son and see him play with their children," she says. "We hope that he will remember these experiences as he grows and that they will develop in him a sense of compassion and a well-rounded world view."