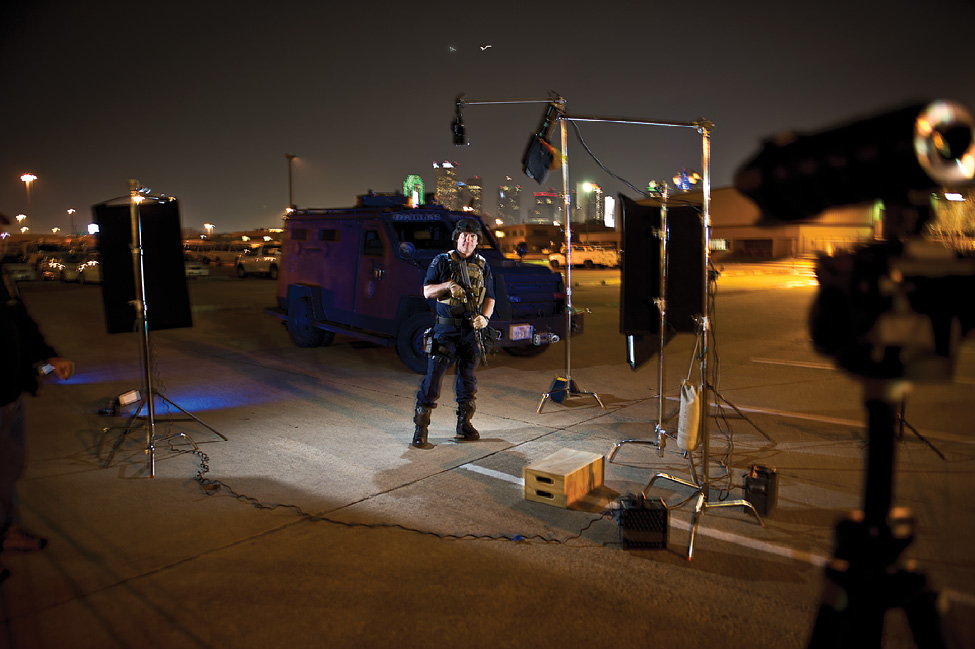 That’s what Detective Rich Emberlin(’86) would probably say when confronting a criminal.

OK, he may not say “freeze.” But that’s what I said when taking his portrait for the alumni featurein the spring issue of The North Texan. With a camera exposure of more than a second needed for the photo, he had to stand still or be blurry.

As soon as I got the assignment, I began planning how I was going to take the photo. I wanted it to be dramatic and to show Emberlin in his work environment. He offered to help add to my background with the use of the Dallas Police Department SWAT vehicle. So with that I began diagraming how my portrait would look and taking practice shots in the studio. It took me a few weeks to work out the lighting scheme.

I used eight flashes to “freeze” Emberlin in the photo: three large flashes like those you would use in a studio, and five smaller flashes like those on a camera. All were wirelessly synchronized to my camera on the tripod. Each flash was directed to a spot either on Emberlin or the vehicle.

We took the photo in the parking lot of the SWAT headquarters in east Dallas. I had wanted to capture a nice dark blue sky as the sun set, but the sky was still overcast. I think, though, that the black evening sky added to the personality of the background and the overall picture. It took three hours to set up, shoot and break down the set for the portrait and a day to select the best photograph and work on toning and color balancing.

But all of the planning, lighting and editing wouldn’t have mattered if Emberlin hadn’t been willing to help make a great photo. In the end, he is what makes the picture work.

Read a Q&A with Rich