Lee F. Jackson to retire after 15 years of service 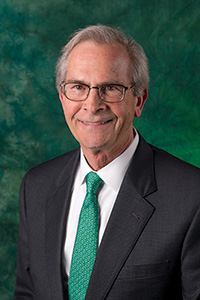 After 15 years of serving the UNT System as chancellor, Lee F. Jackson retires this year. Jackson, the second chancellor in UNT System history, is the longest-serving university system chancellor in the state of Texas.

He has guided the UNT System and its three universities -- UNT, UNT Health Science Center in Fort Worth and UNT Dallas -- through a period of unprecedented growth since being appointed by its Board of Regents in 2002.

Prior to Jackson's arrival, the UNT System was made up of two universities -- UNT and UNT Health Science Center.

As the population base in the Dallas-Fort Worth area grew from 5 million to more than 7 million during Jackson's years of service, the UNT System added UNT Dallas -- the first public university located in the Dallas city limits. He also has helped to institute many new degree programs and professional programs in engineering, law, pharmacy and medicine.

"Lee Jackson has served the UNT System for 15 years as chancellor and our region for four decades if you include his time as a Texas state representative and Dallas County judge," says Regent Laura Wright ('82, '82 M.S.). "His contributions to the North Texas region are significant and the Board of Regents is deeply appreciative of all he has done to help our universities grow and prosper." 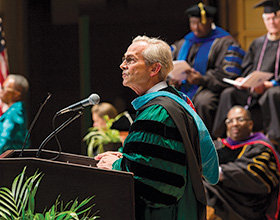 Under Jackson's leadership, the UNT System achieved recognition for UNT as one of Texas' Emerging Research Universities and achieved Tier One status -- the highest designation of research-intensive universities from the Carnegie Endowment.

He also helped to recruit top higher education professionals for a talented leadership team that provides many of the non-academic and planning services to all three UNT System campuses.

"During his tenure, Lee Jackson supported the creation and implementation of programs that have helped transform UNT and the system as a whole," UNT President Neal Smatresk says. "I'm grateful for his years of service and the work he's done to help UNT expand its geographic reach in the North Texas region and increase the number of students we are able to serve." 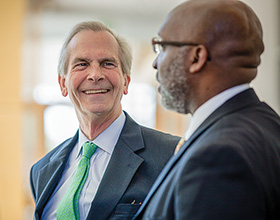 Prior to his work for the system, Jackson had a 30-year career in state and local government. The son of two UNT graduates, he served 15 years as Dallas County judge. He began his career working as an assistant to the Dallas city manager and won honors during 10 years of service in the Texas House of Representatives.

"It has been a great privilege to lead the UNT System team, our board and our three campuses in service to the North Texas region," Jackson says. "I have especially enjoyed the energy and excitement that come from a constant flow of students striving for success in a growing region."

Under Lee F. Jackson's leadership, the UNT System has:

The UNT System Board of Regents voted Aug. 17 to appoint Lesa B. Roe, former acting deputy administrator for the National Aeronautics and Space Administration, as the new UNT System chancellor. Roe, the first woman to hold the UNT chancellorship, will begin working in the UNT System offices in early October.

With more than 30 years of experience in corporate-level strategic positioning and execution for NASA, a multi-billion-dollar federal agency, Roe has a track record of driving efficient productivity, combined with experience working with federal and state-level legislators.

"Lesa Roe is a change agent and that's what excites me about her arrival to the UNT System. She led incredible, high-impact programs at NASA, including the International Space Station and the Mars rover landing," says G. Brint Ryan ('88, '88 M.S.), chair of the UNT System Board of Regents. "At the same time, she also led an initiative to make NASA's business model more efficient, which is very relevant to our Board of Regents. As we got to know Lesa through the search process, she really checked all the boxes as far as skills and experience, and we're eager to get to work with her as we continue to build the UNT System."

Roe shares with The North Texan in the following Q&A why she's the right fit for her new job and how she intends to lead the UNT System into a new era.

Q: What are your career highlights with NASA?
A: What I loved about my time at NASA was being part of a great team -- incredible people accomplishing incredible things together. At NASA I led a team that landed Curiosity on Mars. We made breakthrough discoveries together and pushed the limits of human reality together. When we landed the rover on Mars, everybody in the control room just exploded with excitement, and that feeling -- accomplishing something that's never been done before -- sticks with you forever. I'm excited for the opportunity to help the UNT System team similarly push the limits of what can be accomplished in higher education through research and innovation. I'm confident that, together, we can achieve jaw-dropping milestones to change the world. 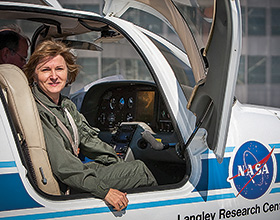 Q: What will be the initial priorities that you will focus on as UNT System chancellor?
A: My new UNT System teammates will quickly discover that I love to learn. I have a passion for the process of learning -- researching, interviewing, observing, experimenting. I'm going to learn all that I can about the UNT System and our institutions. I'll be meeting with President Smatresk and his counterparts, Michael Williams at UNT Health Science Center in Fort Worth and Bob Mong at UNT Dallas. I want to understand their visions and find ways to align our goals within a unified UNT System. I strive to be a strong leader, but approachable. Teamwork is fundamental to the success of any organization.

Q: How does it feel to be the first woman to hold the UNT System chancellorship?
A: I'm proud to be named UNT System chancellor and I believe I'm the right person for the job. I'm a first-generation college graduate who is completely self-made, and, yes, I'm a woman. I'm also the first and only woman to lead Langley Research Center in its 100-year history. If my success as a woman can inspire a young girl to dream big, that makes me feel great. But the real story, what I would tell any young female with professional aspirations, is that I got here through hard work and being part of a great team. 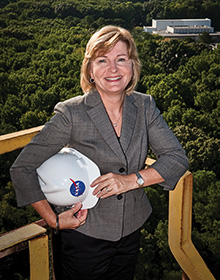 Q: How will your background in engineering help foster a focus on STEM for the system?
A: I have a passion for STEM and my interest in science, technology, engineering and math goes beyond what I did at NASA. STEM can be intimidating for young people and I enjoy finding ways to help students gain new perspectives in what I think is a truly fascinating field. All three of our universities are committed to STEM initiatives and the Dallas-Fort Worth area job market is rapidly expanding in the tech sector. The UNT System is investing more than ever before in research, and game-changing discoveries in STEM-related fields are on the horizon. My background in engineering is a good fit for where we're headed and it's a space I'm comfortable operating in.

Q: How will you help to elevate the UNT System in the ranks of research universities?
A: I will bring to the UNT System a deep understanding of, and a deep belief in, the power of research. NASA changes what's possible through research. We built an International Space Station. We landed on Mars. Clearly, our Board of Regents is committed to research and that was one of the most attractive parts of the job for me. At NASA, research was a critical piece to who we are and the UNT System is similarly committed to developing its capacity for research. I'm proud of UNT's designation as a Carnegie Tier One research university, and now we need to collaborate as a team and find the best ways to take that next step.

Learn more about Roe’s background and career highlights at untsystem.edu/lisabroe. >> Pia Wood has been named the new vice provost and dean of international affairs at UNT.

Great things are on the horizon for the UNT Alumni Association, says Robert McInturf.

Alex Garland ('06) uses emergency management skills learned at UNT and passion for photojournalism to document activism in the world.